By Majka Burhardt and Sarah Garlick A month ago we left Mozambique and Malawi. Less than a year from now we will be back. How much time does it take to gain perspective? Our goal for this initial trip was simple: to learn if an expedition pairing science, climbing, adventure, and conservation would be possible on Mozambique’s Mt. Namuli. Here is what we found:

Mt. Namuli is an extraordinary mountain of rock in northern Mozambique I’d been looking at for over a year from afar, and this November finally got to see up close. My expectations were realistically low. My hope was unrealistically high. What transpired had nothing to do with either emotion. What transpired had everything to do with the unique combination of granite, climbable grass, a strong partner, a scientist, a gecko, and a queen. Are these the necessary ingredients for adventure? Maybe in this case, yes.

Two months ago, before I’d been to Mozambique, if you’d asked me if I were going on a climbing expedition in Mozambique I would have told you I was going on an expedition that involved climbing… and science, and culture, and conservation. What I would not have told you was that the climbing part was the glue. I would not have wanted to admit this. Fast forward to standing beneath Namuli’s 2,000-foot southeast face. Sarah and I had promised each other that the climbing was not important in the grand scheme of it all. We were there on a recon mission: our goal was exploration, pure and simple. But then, in the visual space it took to see the towering, sloping rock, the singular passion driving us forward was undeniable. We were there to climb. I went first. I won the rock-paper-scissors to do so. I shoved myself into the only crack we could find on the whole face, the one with a tree ten feet up, and proceeded to spend sixty-three minutes fighting branches that turned to powder from the dryness, wrestling soot-covered limbs left over from out-of-control crop fires, avoiding torso-sized loose granite spears, and wallowing in dirt, dirt, and more dirt.

Climbing—whether you are watching it or doing it—often seems to happen in slow motion. It was even slower for me that day. I had enough time to think about every one of my decisions that led to this point. I thought of the people living in the surrounding villages and what we’d tried to tell them about our plan. To climb or hike on Mt. Namuli you need permission from the local queen. We’d visited the queen two days before and she’d blessed our journey. Was this the blessing?, I wondered, as I fought to keep myself on the face. Then again, we hadn’t told the queen we needed a blessing for vertical grass, and she likely didn’t know that was what we’d be relying upon for our ascent. Namuli makes her own weather. On 360 degrees of her flanks people live and farm and watch the mountain hourly for a signal of what was to come. What we were doing was no different, really. I tried to tell myself the queen and I were in it together. That worked… until it didn’t anymore.

I went up until I could no longer fight the growing feeling that this was not possible, not worth it, not going to happen. And then I went down. Majka climbing through the first crux: a tree. Photo by P. Yoo

Non-climbers ask me all the time if I climb by myself, without ropes, without a safety system, without anything connecting me to the rock or ice. I usually explain to them that I’m afraid of bees and want a rope to catch me if I get stung. But in November, when I returned to the ground after doing vertical battle on Namuli and handed the gear to Sarah under our newly earned arc of shade from a 95-degree day, I realized that the real reason I don’t solo is that I need another attachment to the rock: my partner.

Sarah took a different approach to the face. She delicately moved across clumps of grass attached only to micro-pores in the unseen granite. She avoided the tree and the crack at the bottom, and earned a new crack, new tree, and more soot up top. She moved through the place I stopped, and she kept moving. And just like that, we, as a team, were climbing. Of course, it wasn’t just like that, really. Sarah’s lead took over an hour, and my next one would as well. It was not pretty. It was battle. But there were moments of finesse, and moreover, the moment of satisfaction—shared—that what we were doing was possible. It was happening.

On every expedition, at least for me, there comes a point when I ask myself, What in the world am I doing here? In a way, I’ve come to love that moment. It’s the signal that things are happening, that wheels are in motion, for better or worse. In Mozambique, the moment arrived within the first 48 hours of the trip. Sarah hiking... before it got dark.

It was dark, I was jet-lagged, and I was struggling to keep our team of porters, guides, translators, climbers, and scientists—14 of us in all—at least reasonably together along a discontinuous trail. We’d reached a river crossing and the porters had stopped, waiting for someone to make the first move. To literally test the waters and find out how deep, and how swift. It took about a split second to realize it was going to be up to me to scout the river. Majka was ten minutes behind with Paul, our filmmaker, and the two scientists. So I grabbed Cotxane, our translator, as my spotter and I stepped into the river’s current: shoes, pants, backpack, and all. Cotxane and I were halfway across, the water swirling around the tops of our thighs, our headlamps providing zero visibility for what might be obstructing the bottom or lurking along the banks, and—wham!—the moment: What the #*!% am I doing in the middle of a river, at night, in Mozambique?

If you’re lucky, there comes a counterpoint to that moment: the stage at which the various pieces and players align, when the expedition hits a perfect sweet spot and you find yourself thinking, Yes…this is why we do what we do. Sometimes it’s an obvious climax, like the summit of a peak or the first cold beer after many days in the field. In Mozambique, we were blessed with many of these moments: the night we hunted chameleons in the rainforest, stalking the little alien-like reptiles for our scientists to observe and record; and the evening of the moonrise, when the moon glowed a shocking red through the smoke of crop fires from the mountain’s surrounding villages. But one of the best was the moment we spotted the gecko.

We’d put this whole journey together on a biologist’s hypothesis that the granite cliff face of Mt. Namuli was the perfect habitat for a certain gecko, and given Namuli’s isolation, if we found this gecko, it’d likely be a new species. Majka and I had spent hours scouting the face, establishing a fixed rope along the most probable habitat: a four-hundred-foot arcing corner system choked with grass, bushes, and dirt. The problem was, we didn’t see signs of any critters. No bugs, no creepy-crawlies, no gecko. Werner on the gecko hunt. Photo by P. Yoo

I was at the base of the wall with Werner, the South African biologist on the expedition, and I was teaching him how to ascend a fixed line. I felt like I was just going through the motions. We’d hauled all this equipment halfway around the world and battled sketchy vertical vegetation to establish the safety systems, we might as well get Werner up there like we set out to do. Just as I clipped Werner’s top jumar onto the line, his eyes caught a flash of motion near the base of the corner system—his powers of observation clearly more attuned than ours. He said he knew it was the gecko in an instant, the flick of its movement gave it away. In a frenzy we unclipped and detangled him from the rope so he could try to catch the specimen as it scurried toward the tree Majka’d grappled with during our ascent. And then, like the story had been scripted from the beginning, the dark-bodied reptile sprinted up the smooth granite face out of sight. Werner turned back to me, his eyes wild, yelling Get me on that rope! 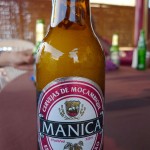 Another one of those moments. 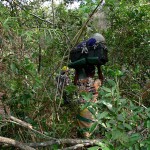 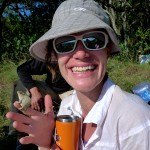 Majka checking out the chameleons. 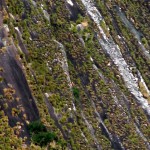 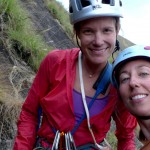 Dirt filled climbing- the best there is 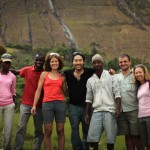 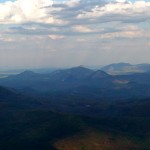 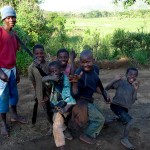 En Route to the Queen 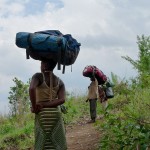 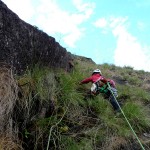 Majka on the sharp end. –Photo by S. Garlick 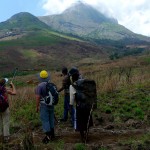 Checking out the hiking route on Mt. Namuli 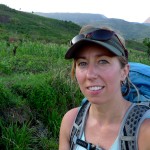 Sarah hiking… before it got dark. 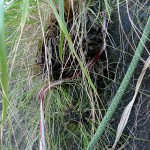 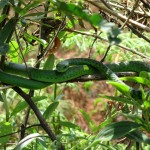 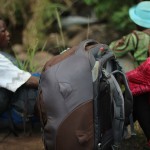 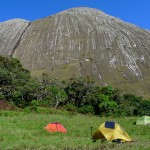 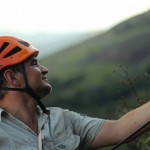 Werner on the gecko hunt. -Photo by P. Yoo 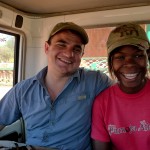 Werner and Yanko, our biologists 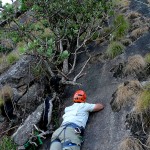 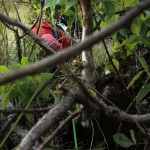 Majka climbing through the first crux: a tree.